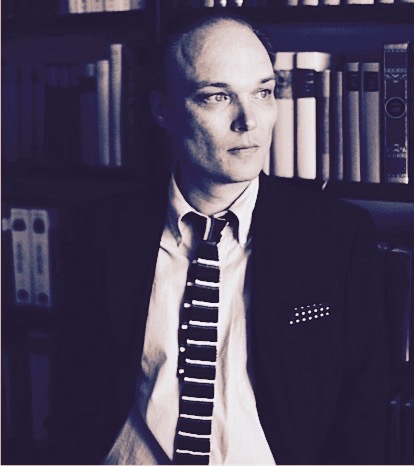 Where were you born, and where did you grow up?
I was born in Hanover the capital of Lower-Saxony, but grew up in West Berlin by the wall.

What sorts of books were in your family home? Who were early formative influences?
My mother has always been an avid reader and my late stepfather was a fairly influential intellectual so there always were enormous amounts of books: the classics from Chekov to Turgenev, from Mann to Musil as well as Benjamin, Jünger, Gramsci etc. The earliest literary memories I have are my mother reading me first Pippi Longstockings, and then Tom Sawyer.  In opposition to this, I myself only read comic books until I was about eight or nine. Those with an all-consuming passion though. The only book I can remember reading – three times at least – was Edgar Rice Burroughs’ Tarzan, Lord of the Apes.

Why do you write?
Because I inexplicably missed out on being a film star.

Does writing energize or exhaust you?
The vast proportion of not-writing that is part and parcel of writing is rather exhausting. The rare periods of writing can be rather energising.

What was an early experience where you learned that language had power?
I spoke in full sentences before I could be bothered to walk. So fairly early on I suppose.

What did you do with your first advance?
Drunk it I should think.

What does literary success look like to you?
I wouldn’t know. Yet.

Why write a book about dandies and dandyism? What kind of research did it involve?
A pathological preoccupation with clothes and appearance. Suffering.

What are the ethics of writing about historical figures?
As few as possible, but I think one ought to have some sympathy for them. Spending months and years with somebody one loathes strikes me as soul-destroying.

Your views on how new technology and social media has have (or has have not) changed writing life? Do you enjoy reading ebooks?
A ‘word processor’ is an enormous advantage if it is used as just that: a vastly more convenient typewriter. The abundant influx of information from the Internet is mostly visual and intellectual muzak, but can be a useful reservoir if stringent discrimination is used. I’ve never read an ebook. It strikes me as fundamentally lacking the sensuality of reading and indeed books.

What are your favorite literary journals?
New York Review of Books.

What other authors are you friends with? How do they help you become a better writer?
To quote Gore Vidal: “When a friend of mine does well, I die a little.”

What are your likes and dislikes when it comes to sartorial style?
Style alone is never enough. Only the meaning it should be invisibly moulded to can give it life. And vice versa.

Whose style do you most admire?
Jean-Pierre Melville’s.

How do you define beauty?
In the eye of the beholder.

Do you have any guilty pleasures?
All of them and none.

If you could go anywhere in time for one day, where would you go and why?
Godard’s early 1960s Paris.

Who are the five people, living or dead, you’d invite to a party?
Jean-Pierre Melville, Jean Seberg, Capucine, Jane Russell,  Jean Cocteau. While Jean-Pierre and Jean C. are arguing with each other and Jean S. and Capucine are bitching about each other, Jane and I could reminisce about the invention of the cantilever bra.

Your motto?
“The light at the end of the tunnel is just the headlight of an oncoming train.” Robert Lowell.