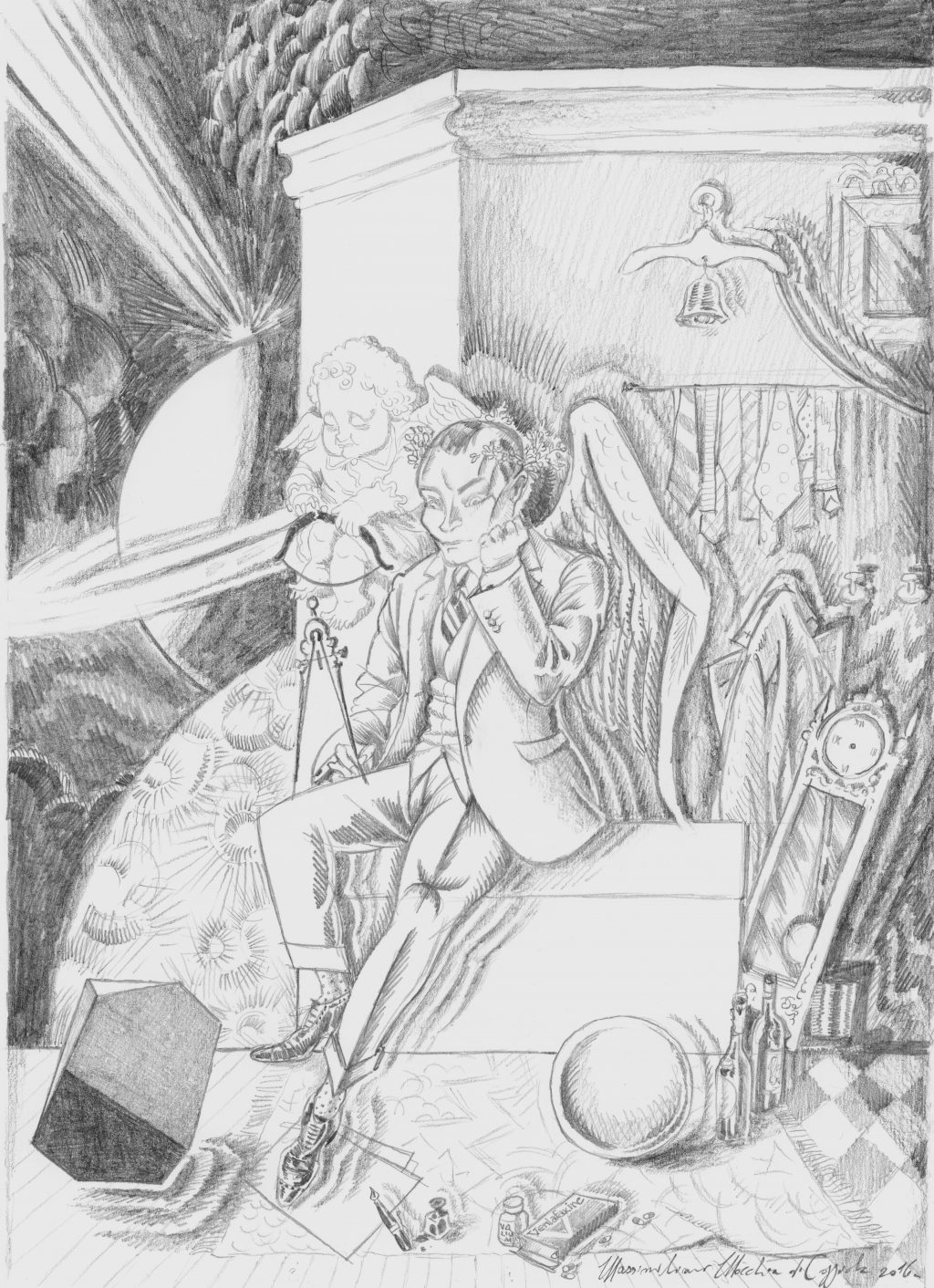 The dandy’s true nature is one of melancholy. His suffering is his art. A closer look at the pathology of modernity’s hero.

The euphoria of fashion has its counterparts in dereliction, depression and existential anguish.

It is a truth universally acknowledged that the origin of dandyism proper lies with George Bryan Brummell known as Beau Brummell (1778-1840). Not only was he the first dandy he also – a byproduct of his dandyism – revolutionised male clothing and so became in the words of Max Beerbohm ‘the father of modern costume’. Brummell replaced the silks and velvets worn by the aristocracy with wool, and returned the silhouette of male attire from the pear-shaped cut of the ancien regime to the proud proportions of classical antiquity. The period of Brummell’s influence did indeed coincide with the neo-classical moment. The excavations at  Pompeii and Herculaneum were relatively recent and the new interest in antiquity inter alia led to a reappraisal of the physical ideal aspired to by the ancient Greeks, as might be admired in the figures of the Parthenon frieze and the Apollo Belvedere. Brummell took the existing clothes of the English country gentleman and refined them according to these rediscovered classical ideals. He thus invented the modern male suit still worn in the 21st century; not because all the components of Brummell’s costume were made, as is the custom today, from one cloth – this would only become the norm a hundred years later – but because of its unified abstraction of form.

This proud achievement was arrived at by what to most would appear to be a routine of back-breaking idleness. The Beau was cerebral even down to the character of his beauty: contemporaries described his high forehead, his piercing eyes full of concentrated irony. Indeed, physical activity of any kind – which he found a nuisance at school and in the army – became anathema to him. In Brummell’s case, the corpus sanum of classical antiquity was cut from cloth.  The earning of money Brummell  eschewed as belonging to the lowly and vulgar sphere. His rejection of any profitable occupation was a silent protest against useful and barbarized man. As the philosopher Otto Mann points out, the dandy’s idleness is not “a natural disposition towards under-achievement, but a philosophically determined lack of realisation”. This attitude makes financial independence a necessity for him – a necessity, however, that he is able to meet only rarely. Starting with a small inheritance of thirty thousand pounds – the confines of which initially proved the makings of his dandyism, as the art of dandyism and indeed ‘good taste’ is ultimately one of reduction, of creating principles appropriate to one’s means – Brummell eventually tended to lose money at the gaming tables of  Brooks’s and White’s instead of augmenting his fortune. And so fate caught up with the Beau. He paradoxically entered his declining years when he got the first job of his life. In order to help him to pay off his debts, the Duke of Wellington managed to have Brummell appointed British Consul in Caen. But the required repayments were vastly disproportionate to his salary, and his situation deteriorated rapidly, culminating in the abandonment of the Consulate in Caen by the Crown. In 1835, at the instigation of his creditors, Brummell spent two months in debtors’ prison. After his release, the remainder of his life was little more than a dance of death: he subsisted – despite his circumstances – on his favourite delicacy, the dainty and rather expensive Biscuit Rose de Reims; and his increasingly threadbare clothes were patched up for free by a sympathetic tailor. In 1840 the Beau had descended to a state of not only financial but also mental anguish that was intolerable. Brummell had suffered episodes of depression – ‘the blue devils’ as he called them throughout his life. They had now become chronic. In the end he was carried off to an asylum where he was soon to die, crying, “Loose me, scoundrels! I owe nothing!”.

The dandy does not strive for a state of doing, but rather for a state of being. He is in Carlyle’s famous description “a clothes-wearing Man, a Man whose trade, office, and existence consists in the wearing of Clothes”.  As such he is an artist who is his own canvas, and not only his clothed body but his entire life are his work of art. Much is made of the question whether dandyism consists of a total preoccupation with clothing or a philosophically determined attitude to life merging Stoicism and Epicureanism. In truth the nature of the dandy lies neither in his clothing, nor in his attitude, but in the total fusion of the two. His self-conception as a work of art also serves us with the keys to his pathology: melancholy, decline and early death are often in his fate. In the introduction to his Anatomy of Melancholy, Robert Burton concedes that Plutarch already knew that idleness was the sole origin of all melancholy. What the world perceives as the dandy’s excessive vanity often has its origin in a perception of physical inadequacy – Michel Leiris speaks of the necessity of ‘using one’s clothes in order to erect a wall around oneself’. The resulting product however has its own crosses to bear or rather to proudly display: the dandy’s melancholia is the flower of evil he adorns himself with. Having realised himself early the passing of time poses a particular problem for him. He is in the words of Baudelaire a Hercules without tasks and hence has to develop strategies for coping with time. Of these the most successful is suicide. Walter Benjamin identified suicide as the passion particulère de la vie moderne and indeed the 20th century is littered with dandy suicides. The most dandyistic of which was without doubt that of Jacques Rigaut, Surrealist poet and friend of André Breton, who at the age of twenty resolved – unprompted by feelings of duress or despair – that one day he would commit suicide which he did on reaching his thirtieth year. The dandy’s goal of triumphing without ever having taken part can scarcely find a better example than in Rigaut: “I will be a great dead man. Try if you can to stop a man who travels with his suicide in his buttonhole.”

A less final way of defying time is illness. In illness, the dandy can legitimately retreat from doing to a state of being. In an attempt to seek rest and recovery through suffering, he frequently cultivates more than an interesting limp. The dandy seeks redemption in suffering in the decadent manner. Oscar Wilde generally thought to be  the most prominent example of late nineteenth-century dandyism in England was always too preoccupied with l’art pour l’art aestheticism and too little with classicism to fit into the Brummellian mould. Ironically, Wilde returned to dandyism proper at precisely the point at which he believed he had left it behind: In De Profundis he reveals suffering to be the secret of life, which nourishes the soul, transcends the banality of pleasure and brings the dandy’s unconscious to the surface. The decline to which both Brummell and Wilde fell victim, and that the Decadence celebrated, is as inherent to the dandy as it is to the antiquity that guides him. Yet fate often denies the dandy the desired release through suffering. His consequential self-determination can leave him with no other delight but the infinitely sad one of tearing himself apart. The excruciating self- analysis, the reopening of self-inflicted wounds, the oscillation between emotionless torpor and violent agitation all too often threaten to be the end of his existence as well as the means.  At one of the frequent points of keenly felt despair in his life Quentin Crisp remarked: ”Even a monotonously undeviating path of self-examination does not necessarily lead to a mountain of self-knowledge. I stumble towards my grave confused and hurt and angry.” The dandy’s suffering is more readily identified as a state of depression by the contemporary eye. His philosophically determined idleness, his complete self-absorption and his cooly analytical nature rather predispose him towards pathological melancholia. Precisely because of his excessively rational nature, he is susceptible to escaping into the irrationality of mental illness, which in the case of depression is not a helter-skelter of emotions but their terrifying absence.

A third and yet more agreeable possibility for defying the unbearable passage of time is geographical flight, as embodied in travel. Leaving the familiar behind is more important here than arriving in the unknown, since upon arrival it is only a matter of time before its passage becomes unbearable again. So it is the departure, and – as Edward Gibbon knew already – the journey itself that approach closest to a form of  relief: “I am always so much delighted and improved with this union of ease and motion that, were not the expense enormous, I would travel every year some hundred miles.”  To the Duke of Windsor, a rather determined example of 20th century dandyism, in as much as he left the throne in order to realise himself as a dandy, permanent globetrotting was certainly one part of filling the huge void created by his abdication. The illusion of a fulfilled life had to be maintained, and the Windsors spent the post-war decades flitting between North America, Biarritz and more exotic locations, always with quantities of trunks and servants in tow. Eventually the at first enchanting rituals of time-wasting inevitably palled, although the duke made sure that the gilded, unchangeable mask over the terrors of the void stayed in place. Harold Nicolson observed: “He pretends to be very busy and happy, but I feel this is false and that he is unoccupied and miserable.” The wish to travel, the desire for flight and obscurity, is yet another utopia that nourishes the natural death wish of the dandy. Partir, c’est toujours mourir un peu; therein lies its attraction.

What remains are the most immediate ways of escaping time, labelled “pleasures” by Baudelaire: alcohol, fornication and les paradis artificiels, excessive enjoyment of which equates most closely to the common definition of decadence. They lie at the heart of fin-de-siècle dandyism, the “naughty nineties” of the nineteenth century. The archetype of the decadent dandy is J.K. Huysmans’ fictional Des Esseintes in À Rebours, the book which the cultural critic Mario Praz described as “the pivot around which the psychology of the whole decadent movement centres”. We meet Des Esseintes at a point in his life when he is already greatly weakened by the excesses of active decadence and has retreated into a self-created hermitage in the banlieue. Like Wilde with Dorian Gray, Huysmans conveys only a vague impression of exactly what pleasures have so sated Des Esseintes. Sexually, however, he descends from encounters with singers and actresses, via “evil” mistresses experienced in every art and ever less refined whores, to “unnatural” love-affairs and “perverted pleasures”. The seemingly inevitable results of this polymorphous perversity are “lethargy and impotence”. The fin-de-siècle dandy replaces Brummell’s asexuality with a glorified sexual pathology. Where effeminacy was an adornment to the Regency dandy, in decadence it becomes a weakness.

While the dandy’s life is in most respects alienated from conventional definitions of happiness, it is neither entirely meaningless nor without salvation. The success of a dandy’s life is marked by the transition from lacerating self-analysis to shedding light on his own opaqueness. Suffering and pleasure are reflected in order to enter the work of art that is his life. Hence fate may reward the dandy with a transcendence not accorded to the unconscious sufferer: Taking his cue from Proust, the godfather of 20th century dandyism,  Albert Camus grants the dandy his ‘own unity by aesthetic means’.  While this unity appears in the form of taste, it is gained through a life-long self-analysis, that goes beyond the banality of all fashion-and lifestyle discourses and might well be termed ‘intelligent taste’.