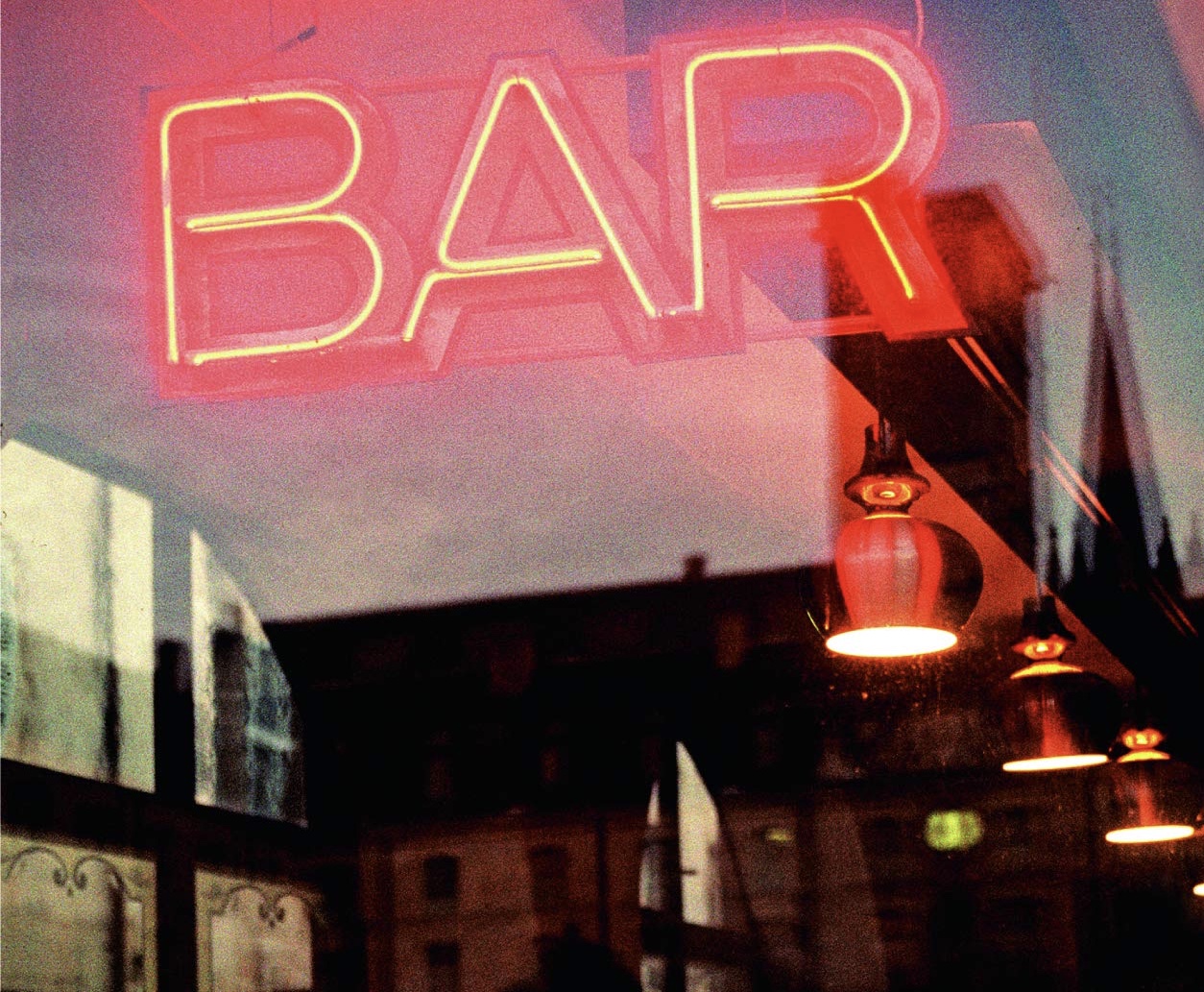 It is in the now famous chapter on “Earthly Delights” of his autobiography Mon dernier soupir (1983), that film director and surrealist survivor Luis Bunuel has the following to say about the perfect bar: “The bar . . . is an exercise in solitude. Above all else, it must be quiet, dark, very comfortable – and, contrary to modern mores, no music of any kind, no matter how faint. In sum, there should be no more than a dozen tables, and a clientele that doesn’t like to talk.” While it’d be far from me to argue with these eternally true words from one of the masters of life this side of paradise, none of my three favourite bars fulfils these austere criteria in entirety. With a good 25 years of heavy drinking behind me, I’m happy to say that my cup runneth more modestly now; yet – lacking the contemplative discipline of the Spanish master – I don’t entirely trust myself with three Martini lunches: to paraphrase la Parker, I’d soon enough find myself under one of the scarce tables never mind the absent hostess. So the first of my holy trinity contravenes the rules in not one but two aspects: Rosebud in Montparnasse a stone’s throw away from the Dome, where Dadaists and Surrealists convened a hundred years ago, plays both exquisite Cool Jazz and serves simple and satisfying solids. Founded in 1962, this bar is the Parisian paradise I’d hoped to find long before I did; Rosebud crops up in my dreams, surrealist and mundane, but never in the form of a sledge nor for that matter a clitoris though women form a good half of the clientele which seems to be the norm in Paris – a pleasant surprise to a Londoner. And they are definitely women rather than girls: the crowd here is largely over thirty and more often than not of a literary bend.

While the latter might not have seemed unusual to a visitor of the cité lumiere as little as twenty years ago, the Anglo-saxonisation of Paris is well afoot now and boîtes heavy on  beer and light on erudition are as ubiquitous as anywhere. To order a pinte really would be a solecism of the gauche kind as the  drinks menu is well balanced between classic- and house-cocktails (with a conspicuous absence of crudités à la Rusty Nail Ass Fuck and neophyte bullshit involving faux absinthe etc.) and all of them mixed to conservative perfection. The ambience oozes class without being in the slightest bit designer or overdeterminedly cool (the music takes care of that). In terms of Melvillian-noir think  Le Doulos (1962) or Le Deuxieme Souffle rather than the alienated modernist perfection of the night-clubs in Le Samourai or Un flic. The dominant bar itself has a burnt orange wallpaper contrasting with royal blue woodwork: the very colour scheme of des Esseintes  drawing-room in À Rebours. The Rosebud-ritual of my newly moderate self  is to have a Martini or Negroni at the bar followed by steak tartare and a bottle of red at one of the tables. Conversation flows freely and towards midnight also between tables though early on the charm of the Parisian bourgeoisie remains discreet. Having been a loud German amongst loud Englishmen for thirty odd years, I found myself very pleased to be trumped by a deafening American friend of mine recently who was dining with me at Rosebud. Alas our neighbours couldn’t find it in their hearts to share my quiet satisfaction.

The next stop of my transcontinental bar-crawl leads me south and to the second biggest city of France, Marseilles. As late as the 1980s (when daddy was paying) this would have been via Train Bleu from Gare de Lyon, preceded by supper at the eponymous Belle Époque restaurant there but until my ship comes in – I hope I will still be able to consume solids at that stage – I contend myself with a sandwich and economy class travel. Depending at what hour of the day I alight on the burning ground of le sud, my first port of call is likely to be La Caravelle conveniently placed in the vieux port. It is placed invisibly to the passer-by on the second floor of the Hotel Bellevue though somewhat independent of hotel custom. Again finding a separate location for supping, after my aperitif, a Lillet or a refreshing beer (allowed I dare say in the more earthy surroundings of sea and south),  is unnecessary unless one craves the otherwise ubiquitous Bouillabaisse (delicious to eat when done well but uncommonly unpleasant to throw up): while the menu here is restricted to ‘Bar-Snacks’, they are as abundant as they are provencal (a brace of sardines, ratatouille that kind of thing). In accordance with the more abundant spirit of a city that prides itself on being the original melting-pot, the music here is soulful as in R&B rather than cool as in Blue Note, but still of  a reassuring vintage and unmitigated quality. But what really makes this place is the combination of perfectly simple interior and spectacular exteriors.

The former is teak untouched since the 1950s with just one African sculpture, the combination of the two somehow making it easy to imagine Picasso sitting at the adjacent table in his habitual lozenge-necked fisherman’s shirt. As comforting as this ambience is, even the non-smoker will want to step out onto the small but popular balcony every half-hour or so as the view of the Vieux Port, picture postcard cliché that it might be, transcends every phantasy that Stephen Tennant reportedly had about it. If I say “my first port of call” this proved to be a euphemism on my premier sojourn to Marseilles. La Caravelle remained the only hostelry I visited in the entire week, though I will admit to morning café taken in the friendly Moroccan café-tabac at the bottom of my stairs.

Next a sharp easterly turn towards Vienna, taking in an aerial view only of rather too well known Harry’s Bar in Venice and all the great Italian café-bars, where the aperitivo is served with such an abundance of chiccheti that supper becomes again superfluous to one’s needs. It is in the Kärntner Durchgang just off Vienna’s main shopping parade that the Loos-Bar can be found, the proto-modernist architect’s dandyistic masterpiece and mother of all American Bars this side of the Atlantic (a genre the most prominent examples of which seem to be found on the Continent of Europe for some reason). Conceived in 1908 for afternoon drinking and as a ‘backroom of the street’ (originally the entrance was level with the trottoir and the door let straight into the interior without the tiny lobby for coats there is now), the Loos-Bar in its exiguous proportions is closest to Bunuel’s ideal: no food is served and before 18.00 a suitably contemplative atmosphere prevails.

To describe its sublime interior I can do no better than to plagiarise myself and quote from The Dandy at Dusk: ‘a dimly lit space of just 27.4 square metres, it is a claustrophiliac’s dream come true, a womb-like space of mahogany and marble, bathed in a diffuse light by the backlit onyx of the entrance area. Mirrors ring the room above eye level, reflecting the heavy marble ceiling, its oblong cassette pattern tapering inward to infinity, along with the drinkers’ thoughts. The geometric, labyrinthine impression of an all-encompassing microcosm is further enhanced by the black-and-white chequerboard of the floor. Yet while these optical illusions suggest the possibility of flight – the Lilliputian stairway to the downstairs lavatory gives the perfect illusion of being on a cruise liner or a luxury train – all the materials are of reassuring and luxurious solidity, and all the lines leading to perdition are straight, never threatening a loss of control along the way.’ Santé!

Featured Image: My own crop